Brian will also do a one hour signing after his talk.

This is the first talk that Brian will do on the new book. Also this is one of Hay’s biggest talks of year – audience of 750.  Brian is a previous Hay Festival speaker. In 2010 he and Elena Vidal presented their book, “A Village Lost And Found”.  In 2014 Brian and Denis  Pellerin also gave a “Diableries – Stereoscopic Adventures in Hell” book presentation at Hay.

Please note: Tickets on sale firstly from 6 April to “Friends of Hay Festival” (not General Public as yet), but if you wish, you can register as a “Friend” (Membership Fee)  HERE.  Among benefits, ‘Friends’ are exclusively able to book for three days once tickets are available and before they go on general release.  Booking open to the general public on Friday 7 April. 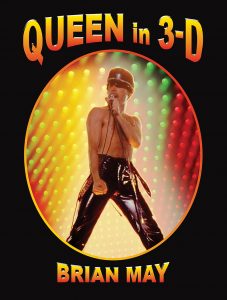 A unique opportunity to share the guitarist’s 46-year vision of his fellow band members, Freddie Mercury, John Deacon, Roger Taylor, as well as Brian himself backstage, on tour and onstage, captured here in 3-D stereoscopic photographs.

Friends of Hay Festival able to buy tickets prior to public launch. Already a Friend. log in here. If you would like to become a Friend, you can do so here or join Hay mailing list.  Booking open to general public on Friday 7 April.