The new July 2017 issue of “Amateur Photographer” carries a 4-page story on “Queen in 3-D”, also featured on the cover. 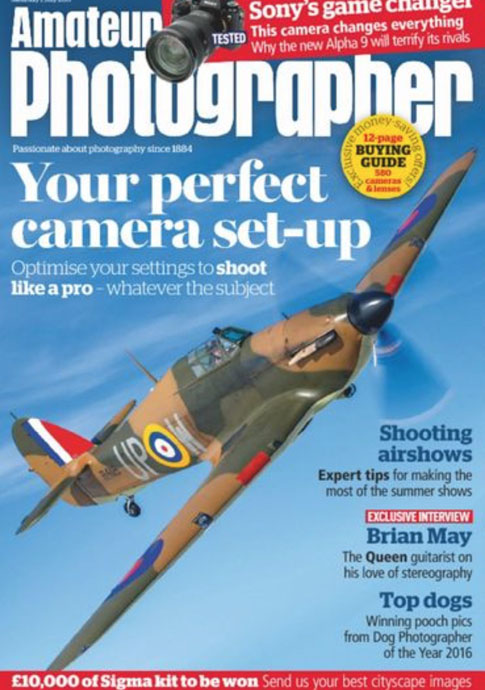 “Mention Brian May, and all kinds of images come to mind: a virtuoso guitarist, whose riffs and solos define classic Queen as much as Freddie Mercury’s stage presence and soaring vocals, a polymath physicist and astronomer, a pugnacious animal rights activist.

He’s also been passionately interested in 3-D and stereoscopic photography since childhood; indeed, AP readers may recall how he resurrected the London Stereoscopic Company (LSC) and designed the innovative Owl viewer. The latest book venture with the LSC is Queen in 3-D, a collection of stereo photographs taken by Brian and other photographers that chronicle the band’s career – from rehearsals for the first album, right through to contemporary arena tours with singer Adam Lambert. It’s also the first book about Queen to be written by a living band member.” 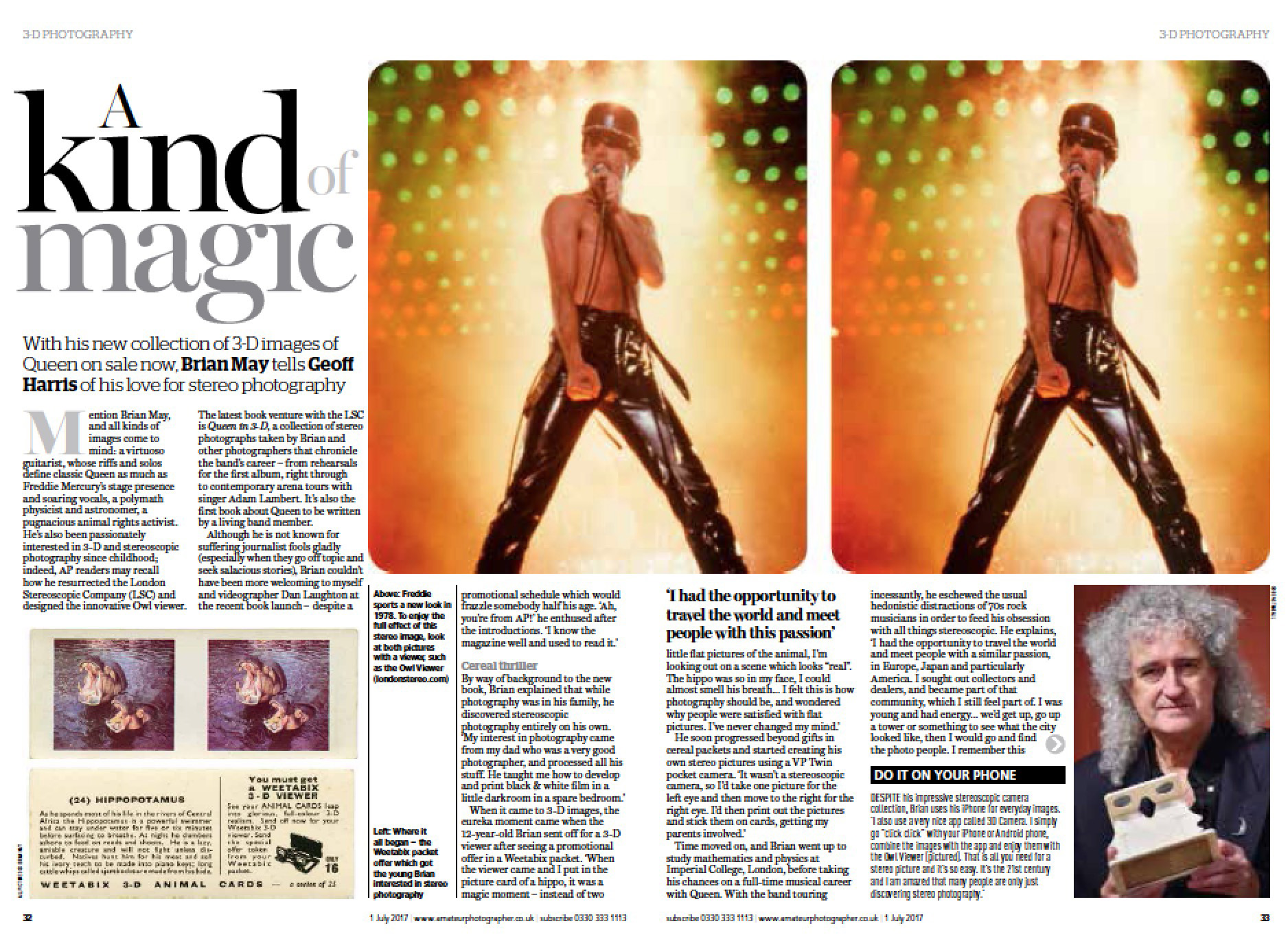 Although he is not known for suffering journalist fools gladly (especially when they go off topic and seek salacious stories), Brian couldn’t have been more welcoming to myself and videographer Dan Laughton at the recent book launch – despite a promotional schedule which would frazzle somebody half his age. ‘Ah, you’re from AP!’ he enthused after the introductions. ‘I know the magazine well and used to read it.’

By way of background to the new book, Brian explained that while photography was in his family, he discovered stereoscopic photography entirely on his own. ‘My interest in photography came from my dad who was a very good photographer, and processed all his stuff. He taught me how to develop and print black & white film in a little darkroom in a spare bedroom.’

When it came to 3-D images, the eureka moment came when the 12-year-old Brian sent off for a 3-D viewer after seeing a promotional offer in a Weetabix packet. ‘When the viewer came and I put in the picture card of a hippo, it was a magic moment – instead of two little flat pictures of the animal, I’m looking out on a scene which looks “real”. The hippo was so in my face, I could almost smell his breath… I felt this is how photography should be, and wondered why people were satisfied with flat pictures. I’ve never changed my mind.’

He soon progressed beyond gifts in cereal packets and started creating his own stereo pictures using a VP Twin pocket camera. ‘It wasn’t a stereoscopic camera, so I’d take one picture for the left eye and then move to the right for the right eye. I’d then print out the pictures and stick them on cards, getting my parents involved.’

Time moved on, and Brian went up to study mathematics and physics at Imperial College, London, before taking his chances on a full-time musical career with Queen. With the band touring incessantly, he eschewed the usual hedonistic distractions of 70s rock musicians in order to feed his obsession with all things stereoscopic. He explains, ‘I had the opportunity to travel the world and meet people with a similar passion, in Europe, Japan and particularly America. I sought out collectors and dealers, and became part of that community, which I still feel part of. I was young and had energy… we’d get up, go up a tower or something to see what the city looked like, then I would go and find the photo people. I remember this place called Bell Park Photo in Chicago – the guy had been there for many years, right through the 1950s boom in stereo cameras. He took a liking to me as he could see how keen I was, and would bring me all these cameras and the gear that went with them.’ 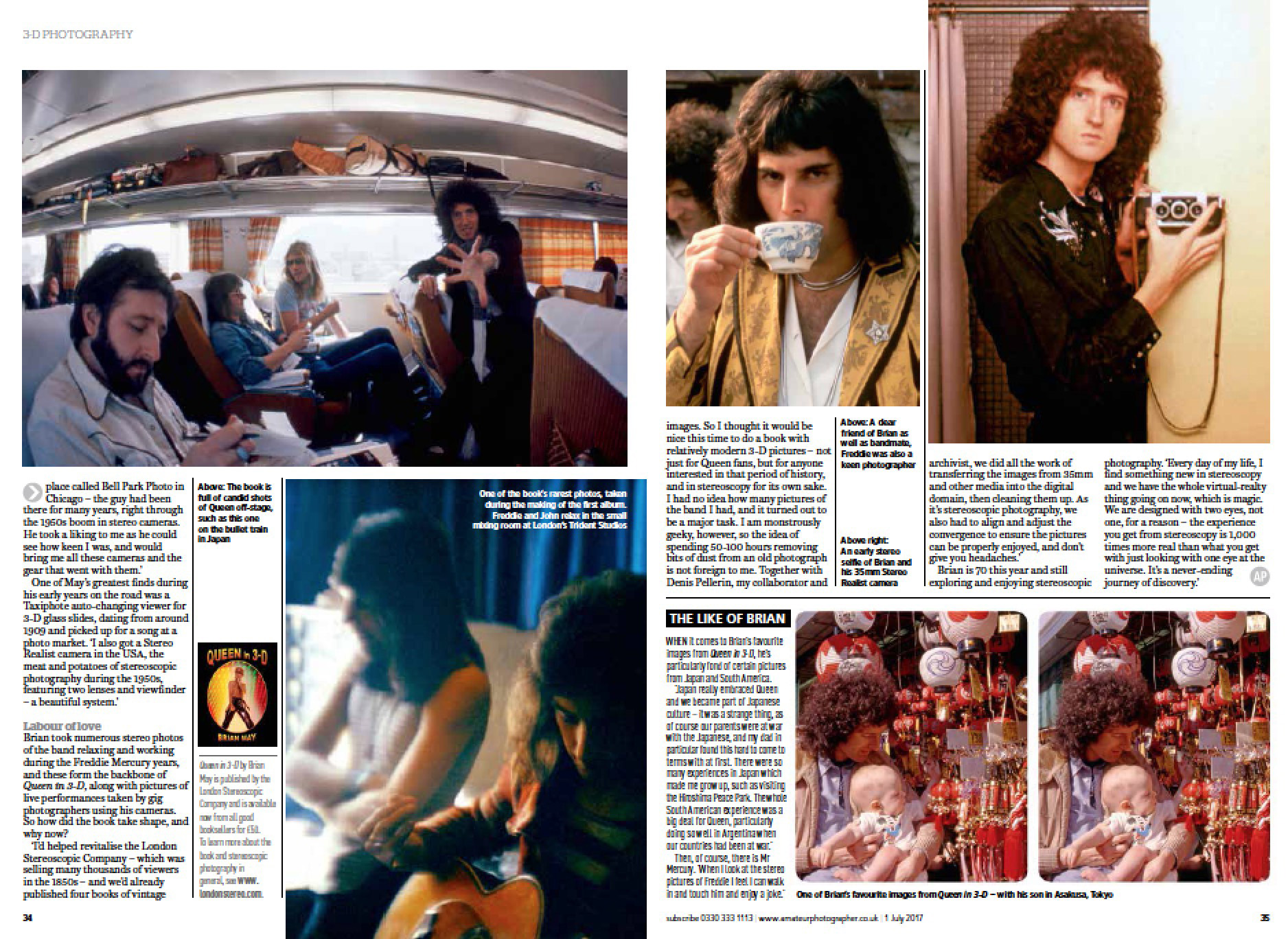 One of May’s greatest finds during his early years on the road was a Taxiphote auto-changing viewer for 3-D glass slides, dating from around 1909 and picked up for a song at a photo market. ‘I also got a Stereo Realist camera in the USA, the meat and potatoes of stereoscopic photography during the 1950s, featuring two lenses and viewfinder – a beautiful system.’

Brian took numerous stereo photos of the band relaxing and working during the Freddie Mercury years, and these form the backbone of Queen in 3-D, along with pictures of live performances taken by gig photographers using his cameras. So how did the book take shape, and why now?

‘I’d helped revitalise the London Stereoscopic Company – which was selling many thousands of viewers in the 1850s – and we’d already published four books of vintage images. So I thought it would be nice this time to do a book with relatively modern 3-D pictures – not just for Queen fans, but for anyone interested in that period of history, and in stereoscopy for its own sake. I had no idea how many pictures of the band I had, and it turned out to be a major task. I am monstrously geeky, however, so the idea of spending 50-100 hours removing bits of dust from an old photograph is not foreign to me. Together with Denis Pellerin, my collaborator and archivist, we did all the work of transferring the images from 35mm and other media into the digital domain, then cleaning them up. As it’s stereoscopic photography, we also had to align and adjust the convergence to ensure the pictures can be properly enjoyed, and don’t give you headaches.’

Brian is 70 this year and still exploring and enjoying stereoscopic photography. ‘Every day of my life, I find something new in stereoscopy and we have the whole virtual-reality thing going on now, which is magic. We are designed with two eyes, not one, for a reason – the experience you get from stereoscopy is 1,000 times more real than what yo get with just looking with one eye at the universe. It’s a never-ending journey of discovery.’