Check below for transcripts

Brian appeared at the Cheltenham Literature Festival yesterday 10 October and gave a fascinating talk to a packed SOLD OUT auditorium…. 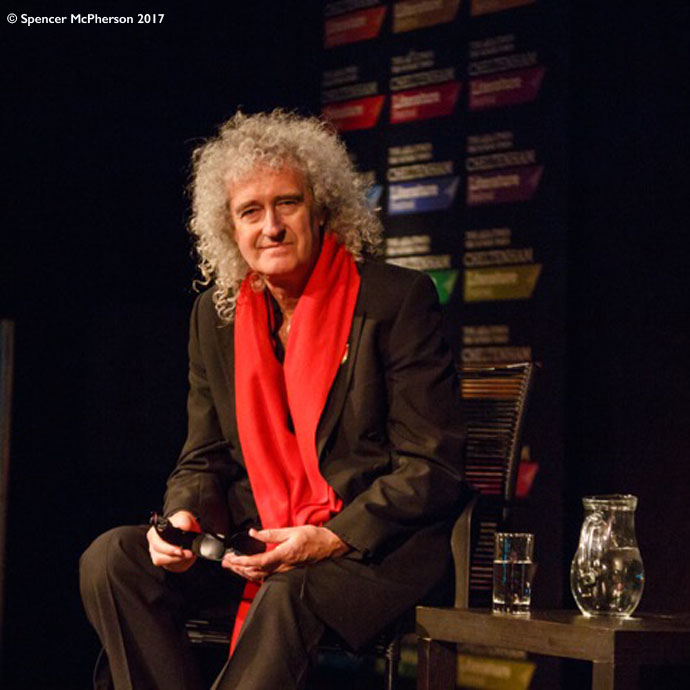 Brian May at Cheltenham by Spencer McPherson

Brian May shows how to use the OWL

Brian May shows how to use the OWL – https://youtu.be/vKrATRRSBEU

BRIAN MAY: Here we have a book. A very unusual book. It has a 3-D cover, but it has much more inside. This is a very very quick unwrapping, unravelling. This is your book. This is your journey into the book . . . and this is a stereoscope. This is your OWL and it assembles very quickly … logo on top here – the rest and you’re ready with your stereoscope. You hold it by the back and focus wtith the thumbs. So this stereoscope position over any picture in the book or any double picture, I should say. Here we are – her’s a picture of Freddie driving a plane, or piloting a plane I should say, and basically you can focus like this and instead of just seeing a flat feature – a window you can walk through and talk to Freddie and fly the plane. So there you go. It’s a whole history of Queen, and I guess that he stood me in 3-D in 45 seconds.

DOMINIC COTTER: BBC Radio Gloucestershire. Bur first off – we’ve been enjoying the music for four decades, but a new book presents Queen in a way you’ve never experienced before. “Queen in 3-D” is a collection of personal photographs and recollections by Brian May. The legendary guitarist appeared at The Cheltenham Literature Festival, complete with specially created 3-D viewers. Our reporter Jo Durrant had a chat with Brian, who explained that the book is unique for several reasons.

BRIAN MAY: It is, I guess, because, well, for a number of reasons – it’s the first 3-D book o Queen; it’s also the first book written by a member of the band, and I think it’s the first book written by a member of any band with a text which is accompanied by photos that they took themselves, but the stereo is the important thing – the 3-D part is the most important thing, because to me it’s the most evocative way of chronicling an event or a time or a scenario, and I’ve always been passionate about it, ever since I was a kid. I always thought, why do people take flat pictures if they can take 3-D pictures in depth, and so much more is captured. You feel like you’re really in a time machine when you look at these pictures.

JO DURRANT: It’s a beautiful book. I’ve been having a look through it, and you look through the OWL viewer that you’ve cerated and you really feel that you’re there at a concert. That’s obviously what you wanted to evoke?

BRIAN: Yeah. i’m glad you say that – yeah. I feel, you know, something I always wanted to share ever since i was a kid. You know, when I made some money eventually I was able to buy some Victorian 3-D pictures, and to me it’s an incredible rush to see this stuff. You know with, in the case of Victorian pictures you’re transported back to the 1850s, and it’s like you’re there at the Crystal Palace or whatever. and I was so thrilled with this, and then I started to take 3-D pictures of friends with stereo cameras – and actually you can do it on an iPhone – I can tell you how to do that later if you like. Its very easy. It’s really easy. You know, but then I thought “How do I share this? How can I actually get this out there”, because everybody I showed it went “Wow – can I have one? Can I do this?” Well now I can. Now we have an OWL, which I invented, I feel like – I designed, you know. I didn’t invent the stereoscope, but I invented this one, and it’s made in Sunbury upon Thames and it gives you all the thrills of real Victorian 3-D – so now I can take a picture of someone. I an give them an OWL and I can bring it up on their phone and instantly they can see themselves in 3-D. So to me it’s a way of life. I love everything to do with 3-D. It’s become a passion. You know, I mean I have a lot of passions, I’ll admit, but this is, this is something which just stayed with me through a very long time.

JO: And in writing the book and going back through the photographs it must have evoked so many memories.

BRIAN: Yeah, yea. That was the big thing. It surprised even me really. You know, I thought, well this is great stuff and I would if I’m gonna do a book I want it to be a 3-D book, but when we assembled all the pictures that were going to be in it, I was surprised firstly how many there were. I didn’t realise I’d been so consistent in getting the 3-D camera out when we were on the road, in dressing rooms, cars, boats, plans or whatever, but then what we did was digitized them all and put them on a screen in 3-D and we had a session, or a few sessions, where I just sat there and we projected them one after the other and I spouted into a machine something like you’ve got there, you know, and it was astonishing what came out. i couldn’t believe how much I could remember because my memory’s not that great. If you asked me what i did in 1964, I’ll e scratching my hear, you know, but show me a picture in 3-D ad I can walk through that that frame, that window and I’m there, so I could remember the people’s names, I could remember where we were, what we were doing, and then the most amazing thing was I could remember how I felt at that time so I could do a kind of emotional journey as well. So the book became much more than I expected it would be. It’s 3-D, but it’s kind of multi-dimensional because it’s a kind of – I’m not going to say it’s an autobiography, it’s kind of biography of Queen and myself, I guess.

JO: It is like going back in a time machine, isn’t it?

BRIAN: It is and people are astonished when they look in the book. I must say, you know, I get a lot of “Wow”s, which is what I like, you know. It’s – they look at the pictures full frame – I’m going to take the book out now. We’re on radio, I know, but you can imagine me taking this beautiful book out of its cover. My cover has a lenticular 3-D picture of Freddie on the front, which is another whole story, but it kind of sets the tone for the book. But you open up the book and there’s a text which you can read, which is very personal from me and very often if you open it up at a double page you’ll see a large picture on the lefthand side, which is the blow-up of the picture – that’s the way we’re looking, the way we’re used to looking through books, but then on the other page you’ve got a pair of picture which are designed to be viewed in the stereoscope. You put your stereoscope over the top and you can focus it as well with your thumbs, but then the experience you get is something completely different. I’m just about to do this to you and…

JO:…. It’s like – it’s like Freddie’s jumping up out of the screen and I am there, right now at that concert.

BRIAN: You feel like that, don’t you, yeah. I mean I just love that, you know. To me now. I didn’t take that picture, because I was on stage at the time, but what I would do is give the stereo camera to somebody I trusted, and if I was lucky it was someone who could actually handle a camera, and I would get some pictures back like that at the end of the night. So this is Freddie and he’s full prime, you know and you can you can see every vein. You can see every bead of sweat and the light shows it was the time, so to me it’s great and the onstage pictures are exciting but in a way the offstage ones are even more exiting because it’s something you’ve never seen and it’s intimate in a way which no photographer as such would have bee able to capture, because everyone was used to me having a camera, in fact we all had cameras, and w’re all snapping away at each other. Freddie, famously, had his Polaroid camera and used to take pictures of everyone – everyone – and give is pictures away, and he had a very generous nature, so normally he would snap, snap, snap, snap – “Here you go. Here you are, Darling”, and I’d love to know where some of those pictures are now. I mean there’s a 3-D picture in here of Freddie taking a picture of me, so I had the 3-D pictures. Somebody must have the Polaroid that he too of me. I don’t think I do, sadly. I wonder where it ended up. You never know. It might turn up someday.

JO: And you see here at Cheltenham and going to share your passion, which I know your 3-D passion, 3-D photography passion is huge, it be lovely to be back in Cheltenham and sharing that with the audience.

BRIAN: It is nice. It’s actually pretty exciting. you know people say to me, “Ah, you know you played to tens of thousands of people. This is nothing”. But actually it kind of makes me nervous because it’s ver intimate. I don’t have a guitar to make a big noise with. I don’t have sound and lights and stuff. it’s just me and well, my secret weapon is the fact that I can project in 3-D and that’s what people like, so I feel like that kind of stops me being terrified because I know I can just show a 3-D picture on the screen and people go “Wow”, because they don’t expect to have that experience.

<‘WE WILL ROCK YOU’ playout>

DOMINIC COTTER: (from Studio) Wonderful. Queen on BBC Radio Gloucestershire and Jo Durrant having a good old chat with Brian May.