BRIAN MAY  appeared live on Sky News this morning at 8.15am talking about his “Queen in 3-D” book, that he would be giving a talk at the Cheltenham Literature Festival tomorrow, also much about Queen’s history, evoked by the book. Also touched on forthcoming tour with Adam Lambert, the Queen movie, and not forgetting wildlife – asking viewers who are members of the National Trust to vote against allowing fox hunting on National Trust land.

Here  follows a transcript of what was said about the “Queen in 3-D” book.

SARAH-JANE MEE: Now our next guest is a musician an author and astrophysicist but probably best known as the lead guitarist of the rock band Queen. Brian May has released a new book called “Queen in 3-D”. It features a collection of rare and some never-seen-before photographs that he’s taken on tour with the band using his 3 -D camera. Good morning to you Brian. So this is essentially a life’s work. When you’re not onstage performing you were behind the scenes snapping away.

BRIAN MAY: Yes, a lifetime’s passion. I suppose I’ve always been really really interested in 3-D and I’m captured by the magic of it and it actually it wasn’t planned to be a book, you know. I just suddenly realised I had all this material and it would make a great book and it’s a kind of chronicle of the band and also of my life, I suppose in some ways. The thing about these pictures, they’re so evocative being in 3-D that they stir up an incredible amount of emotion and memory, much more than just a snap on, you know, a flat snap on the page.

SARAH-JANE: So this [OWL viewer] comes with the book, “Queen in 3-D”. These are the glasses you need to use.

BRIAN: This is my OWL, which I invented. I didn’t invent 3-D. but I did invent this which is made in Sunbury upon Thames, but, yeah, this comes with the book and it’s easy to to assemble. It comes flat like this and you fold it up here and then you position it over any pair of the pictures. Now the pictures are fine to look at…

SARAH-JANE: I was looking at them earlier on you don’t have to look through the glasses to see them – you get a different kind of experience using the glasses.

BRIAN: Yeah. This is a particular favourite of mine. A sort of intimate picture of Freddie when he wasn’t aware, you know. I guess if a photographer was there Freddie was quite shy, but if I was around snapping, he didn’t notice and he was quite relaxed so it looks nice as a picture but as a 3-D picture it looks something else. Have you seen this?

SARAH-JANE: No I haven’t. I’ll have a preview.

BRIAN: An opportunity to show you to show you. It’s a shame it’s not 3-D TV.

SARAH-JANE: But you were saying this is 50 years in the making.

BRIAN: Yes really. There you go. You can focus it…

BRIAN: Was that a Wow?

SARAH-JANE: It was, yeah. It works, I can confirm it works.

BRIAN: You feel like you could walk through the window and actually talk to him and touch him, don’t you.

SARAH-JANE: Yes essentially this is this is your diary, Brian…. using pictures.

SARAH-JANE: And what are the sort of moments you’ve captured in there? What are the memories that stand out?

BRIAN: it’s a lot of stuff on stage and off stage but also all the other things that we did during that time like being in the studio, you know. Odd times I’m clicking away in dressing rooms in buses in planes in trains having arguments offstage and just everything really. It’s nice. I think the fun of it comes across but it also, I found when I looked at these pictures it stirred up stuff in me that I’d forgotten I even had in my head. You know it’s a very evocative way of chronicling it.

For more of interview go to BRIANMAY.COM here 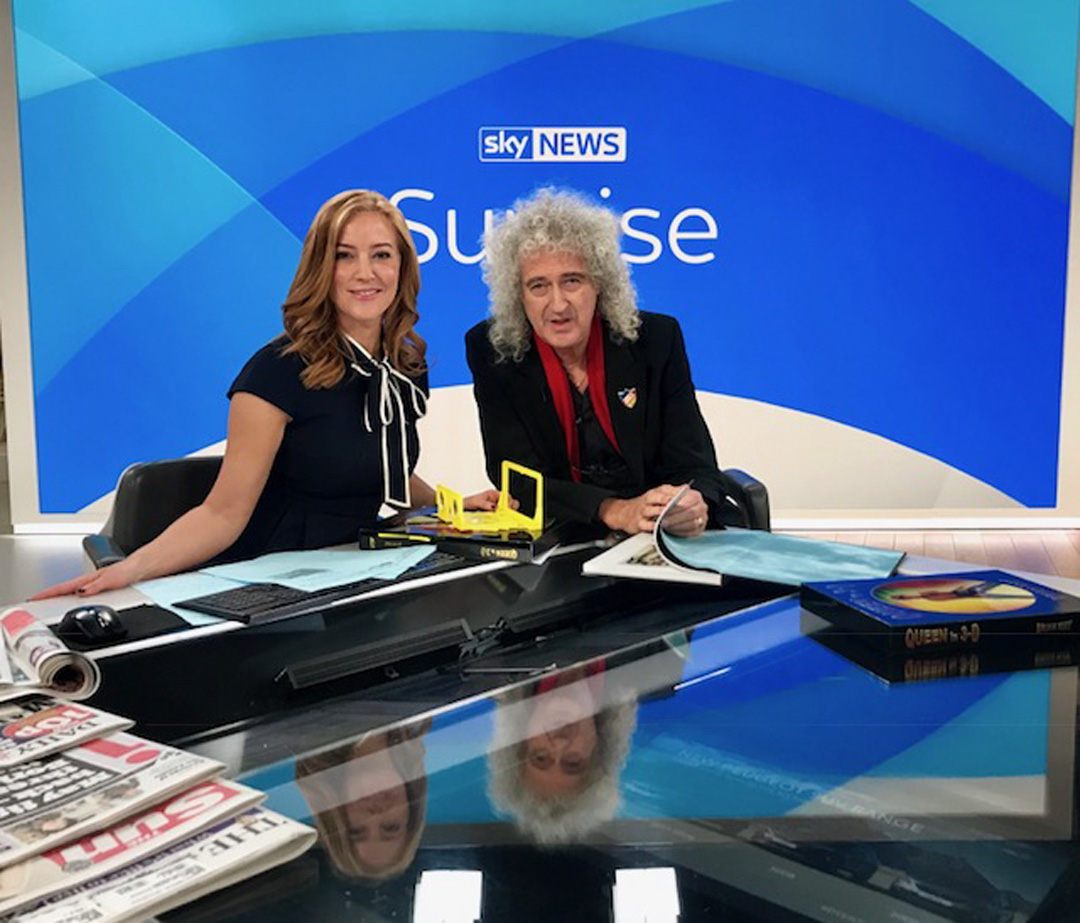