At 70, Brian May shows no sign of slowing down. He’s on a world tour, has just published a 3-D book and fights for animal rights, says Danny Scott. 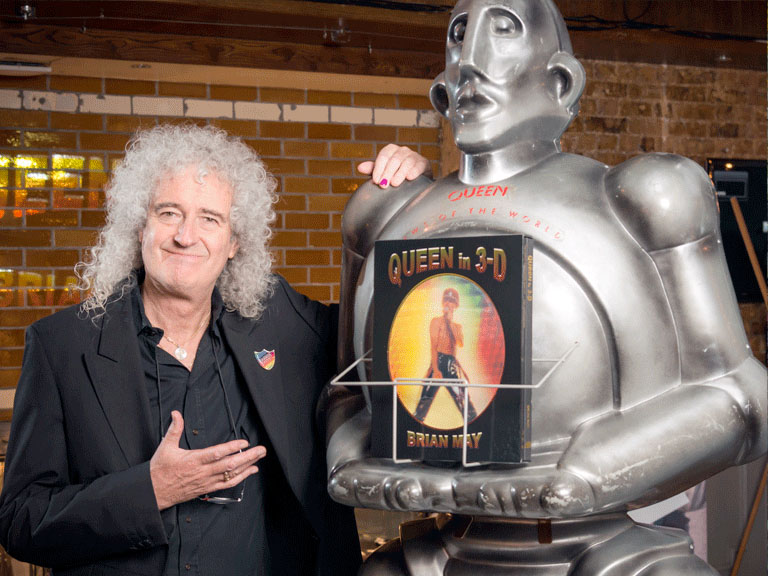 Rock-star follies come in different shapes and sizes. Rod Stewart has his football pitch. Pete Waterman, the man behind Kylie Minogue, has a model railway. Sting’s got his Italian vineyard.

Brian May, guitarist with Queen, has orphaned badgers, foxes and hedgehogs, an organic vegetable garden and a forest of rhododendrons, some of them more than 20ft high. His wildlife charity, the Save Me Trust, is based at his 70-acre Surrey estate and includes a deer shed, fox and badger runs, plus its own ambulance and veterinary surgery.

Waiting for the interview to start, I look out over one of the massive gardens watching two wild roe deer munch the lawn. ‘Aren’t they lovely,’ whispers May, suddenly at my shoulder and filming the deer with his phone. The 70-year-old is tall – with that famous barnet adding at least four inches – dressed casually in loose-fitting combat trousers, badger T-shirt and a beige utility waistcoat. Hardly the kind of man you’d expect to play lead guitar in the most extravagant band in rock history.

In person, May is a sort of anti-rock star; quiet, considerate… and remarkably gentle, padding softly across to the kitchen to make me a coffee and then leading us into what can only be described as his ‘camera museum’. And this is the reason we’re here. May has recently published a 3-D picture book, filled with stereoscopic images (the technical term for 3-D) that he took while Queen were recording, touring, relaxing and larking about. The images are accompanied by May’s words, telling Queen’s story from the inside. He calls it the closest thing to an autobiography he’ll ever write.

‘My interest in 3-D images came via Weetabix,’ laughs May. ‘When I was a kid, I remember opening a packet and out popped an image of a hippopotamus. Well, it was two images, side by side and seemingly identical. Also in the box was an offer to buy something called a Vistascreen viewer for one and six.

‘When the viewer arrived, I placed the hippopotamus image inside and… it was like magic! Like seeing the animal there in front of you, with real depth and colour.’

That very Vistascreen viewer is sitting on the table next to May, just one of a huge collection of stereoscopic cameras and images that line the room. Some of the cameras seem amateurishly Heath-Robinson, but others are beautifully crafted works of mechanical art, bought from flea markets and antique shops during Queen’s world tours.

Queen in 3-D is May’s fifth stereoscopic book (to publish his books, May has relaunched the London Stereoscopic Company, which began life in 1854), but the first to deal with his own life story and Queen.

‘I’ve never been that keen on writing about myself because I’ve always got more interesting things to do,’ he explains. Alongside the publishing company and the wildlife trust, there’s his very vocal campaign to stop the badger cull, astronomy (May completed his astrophysics PhD aged 60), the forthcoming Freddie Mercury biopic and, of course, touring with Queen.

Although the current version of the band features Adam Lambert – a former American Idol contestant – on vocals, May knows that people will always want to talk about Freddie Mercury.

‘I first met him in the late ’60s,’ remembers May, ‘when he used to come and see Smile, the band I was in at the time. He was always telling us, “Don’t just sing the songs. You have to give the audience a show”. I used to think, “What the hell is he talking about?” but when Queen finally came together, I began to understand what he meant. Freddie wanted to make every gig an “event” and he was always the ringmaster.’

‘The strange thing is that, off stage, Freddie was nothing like that. He had a very sheltered upbringing, which made him quite shy and insecure. And I think you see that in some of the photos I took of him; he wasn’t always comfortable in front of the camera.

‘I’m sure that the stage persona was Freddie’s way of dealing with his insecurity. Being in a band allows you to reinvent yourself… and Freddie reinvented himself as a rock god. A pretty good one, too!’

“I’m 70 years old and I’m busier than I have been in a long, long time. And I still have the hunger… the desire to create and investigate. “

The 1975 hit Bohemian Rhapsody may have turned Queen into one of the world’s biggest bands, but some of the 1970s tour pictures look surprisingly ordinary.

‘Touring in the ’70s wasn’t quite as glamorous as it seemed,’ May says, leafing through the book. ‘You’d grab a couple of hours sleep, lying on the amps at the back of the tour bus, have a wash in the toilet of some American truck stop. When we were abroad, I was lucky if I rang home once a week – no mobiles in those days. To keep in touch with people, I used to send airmail letters and postcards. Hand-written!

‘But the best thing was no paparazzi. Although Queen were famous, no one was interested in us as people; we were just musicians. Sadly, all that changed in the late ’80s… all the stories about Freddie. After I got together with Anita I had my fair share, too. [May met EastEnders actress Anita Dobson in 1986, two years before his first marriage to Chrissie Mullen ended; he and Dobson married in 2000.] I remember being out in the garden with the kids and suddenly realising we were being photographed. It felt so nasty, like my privacy was being invaded.

‘And then when we lost Freddie… some of the stories were horrific.’

Wading through the 360 images in the book uncorked a lot of wonderful memories for May, but the pictures of Freddie were sometimes tinged with sadness.

‘There were tears,’ May admits. ‘Lots of tears. Seeing him in those images, so full of life. Being Freddie! I miss him every day, but I’m also aware of how much warmth and love there is for him. When people talk to me about him, they always smile. Even after all these years, he still makes people happy.’

After Mercury died in 1991, May fully expected to walk away from Queen, but there were absolutely no plans to ‘retire’.

‘I’m rubbish at doing nothing,’ insists May. ‘Even when we go on holiday, I find it difficult to relax. I spend the first couple of days by the pool, then I’m off. Exploring, meeting people, seeing animals, taking pictures, watching sunsets and swimming in the sea.

‘My good lady wife is very good at “enjoying the moment”. If we’re having dinner or on a plane or at a party, she’s there, enjoying the meal and the company, fully immersed in the moment. She’s always asking me why I can’t do that and maybe it’s because I live in my head, so I’m always thinking about something else. A telescope, a book I’m reading, a song by Little Richard, a stereoscopic image I found tucked away in a drawer.

‘I do try to listen to what Anita says and I am getting better at… being “here”. Whatever the moment is, it’s not around for long, so I might as well enjoy it. I sometimes look back at the amazing things I did and wonder if I really “enjoyed” them as much as I should have. Did I miss out on years’ worth of fun? Am I a bit of a miserable old bastard? Ha ha! I’ve given you your headline there, haven’t I!

‘Meditation is helping me. It’s helping to calm down my mind. And exercise. I was never into the drink and drugs side of rock ‘n’ roll, but I did neglect my body for many, many years.’

Some of the 1970s images in the book show him as worryingly stick-thin.

‘That was a stomach thing I had,’ says May. ‘It did get resolved, but I was still dealing with a poor diet, no sleep, stress, zero exercise. Eventually – I must have been about 60 – I realised I couldn’t carry on like that. These days, I watch what I eat [May is vegetarian] exercise for an hour every morning, hot and cold shower, and finish off with a bit of meditation. I’m finally paying attention to my body.’

‘I’m 70 years old and I’m busier than I have been in a long, long time. And I still have the hunger… the desire to create and investigate. To get out there and experience beauty. The immense beauty that’s all around us.’

As if by magic – and this really did happen – a fox appears, trotting across the lawn. May nudges me and chuckles quietly. Under his breath, I can just hear him say, ‘Look at him. Gorgeous. Why would you want to hurt him?’ He stands up and walks over to the window.

‘I remember when I was at Sunday School and the teacher told us that we are better than animals because we have a soul and that means we can go to heaven. I thought about my pet cat at the time… she had skin, blood, ears, eyes, legs. Surely, she had a soul. I couldn’t understand that and I still can’t understand it today. What gives us the right to say we are better than animals? What gives us the right to kill an animal because it’s in the way of a road-building scheme or to protect an already ailing food industry? That’s what the badger cull is all about, y’know.

‘What we achieved with Queen means a lot to me, but the work I’m doing today is more important than all the number ones and sold out tours. This is about treating these creatures with respect and trying my best to be a decent human being. Isn’t that the stuff that really matters?’

Queen in 3-D is on sale now