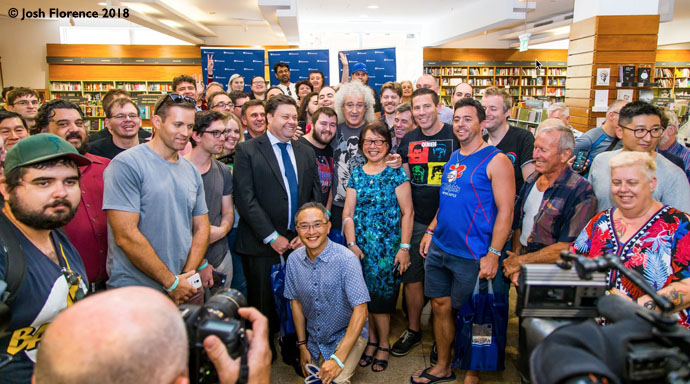 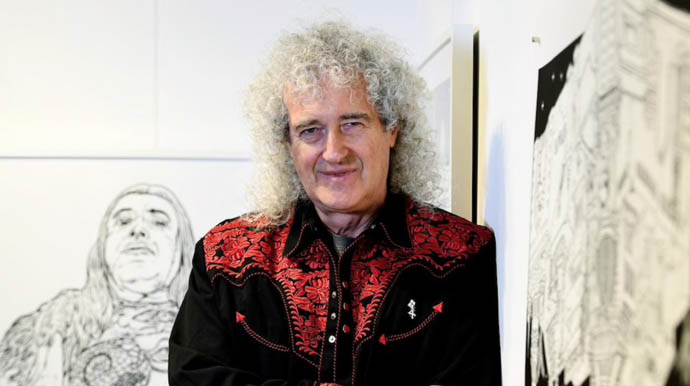 Brian May has taken a break from Queen’s Australian tour to promote his 3D photo book of the band. The long, black curls may be silver now but Queen guitarist Brian May still looked every inch the rock star while meeting fans in Sydney. The rocker was visiting CBD bookstore Kinokuniya in his capacity as a photographer, promoting his book of 3D pictures of his band through the decades.

“This is the Victorian way of viewing 3D and it’s still the best, to be honest,” May told AAP on Thursday.

Queen in 3D features never-before-seen pictures of the band taken by May from the 1970s to today using a 3D camera. It also includes some writing from the guitarist, reminiscing on the events surrounding the photos.

“In the end there was a whole story to be told around these pictures which is what you find in the book,” said May, who performed to about 20,000 people in Sydney’s Qudos Bank Arena the night before.

Queen, whose frontman Freddie Mercury died in 1991, have been performing with American singer Adam Lambert since 2011.

“We’ve kind of grown together as a team like a family really … he really does give the band new life and he doesn’t have to be Freddie in any way whatsoever. He just is what he is and it works,” he said.

Mercury is still a huge part of the band’s identity, featuring on the cover and also on May’s T-shirt.

“We always have Freddie with us and the fact that we have Adam there doesn’t take away from that at all,” he said.

A feature film on the band’s life, Bohemian Rhapsody, has been in the works for nearly a decade. Directors Stephen Frears and Dexter Fletcher were reportedly signed on to the project at different times. Then, last December, director Bryan Singer was fired and Fletcher was back on board. Sacha Baron Cohen was originally hired to play Mercury but quit and Rami Malek took on the role.

“Sometimes you have a bumpy journey but it comes to a great conclusion. I think people will love (the film) from what I’ve seen,” May said.

* Queen in 3D” is available now and the band is performing in Sydney, Brisbane, Adelaide, Melbourne and finally Perth on March 6.

MSN: Are you enjoying being back in Australia?

BRIAN MAY: Yes, of course. Yeah I mean I didn’t really know if we’d ever get back here, you know, so it’s amazing to be back here, yeah. It really is, yeah.

MSN: It’s fantastic to have you back here when there’s still so much going on.

BRIAN: A lot going on, yeah. I mean Adam is a lot going on in himself, you know. We’ve kind of grown together as a team, you know – like a family really – and I mean Adams half my age. You wouldn’t kind of feel it though you know. We have the same kind of ethic, work ethic, and he’s great to work with and it really does give the band a new life. And he doesn’t have to be Freddie in any way whatsoever. He just is what he is and it works.

MSN: I see that you do have Freddie with you today on your t-shirt.

BRIAN: Yeah – well we always have Freddie with us, you know, and the fact that Adam’s there doesn’t take away from that at all, you know. Adam actually gives a lovely little bit homage to Freddie during the show and he’s very open. He’s like: “Yeah. I’m not Freddie you know – no shit – but, you know, I am what I am a we are what we are now and this is a moment in time and I feel very very fortunate to have it.”

This is free hologram and it’s the Victorian way of viewing 3-D and it’s still the best to be honest, so this is my own little viewer called the OWL. Yeah – invented by myself and made in Sunbury upon Thames and now in China as well. It’s an OWL and this is what you get with the book and this is how you view the 3-D content of the book and of course it’s the Victorian way. It’s very intimate, You’re just one-to-one with the pictures and in my opinion still the best way to enjoy 3-D. And I carried the 3d camera with me all those years in Queen, which is unusual, so all these pictures are real and when you look at them and you look at Freddie, you look at us in those days – you knoW the 70s the 80s the 90s – it’s like you’re there with us. So it’s a unique book.

MSN: And on top of all of this we know we’re all eagerly waiting for the film that you’re also working on.

BRIAN: We have a film, yeah. It’s been shot. It’s wrapped. The bits that I’ve seen are amazing very touching – very moving story I think. It was a long journey to make this film and a very bumpy journe. Sometimes things are like that you know. Sometimes you have a bumpy journey but it comes towards a great conclusion.

BRIAN MAY AT KINOKUNIYA

Kinokuniya Sydney is delighted to host legendary lead guitarist of Queen, and author of Queen in 3D, Brian May, here in store.

There’s no ghost writer for this book. It’s just me.
– Brian May

With these words, the author announces the first book ever to be published about the legendary rock band Queen by a member of the band. And certainly the first book of its kind in the world. A unique collection of original, highly personal snapshots of Queen in Three Dimensions, from the band’s inception in the early ‘70s right up to the present day, accompanied by the exclusive recollections of founding member and lead guitarist, Brian May.

RSVP in store, by phone: 02 9262 7996 or email with full names and email addresses of all guests.
Purchase a copy of Queen in 3D with signed bookplate from Kinokuniya Sydney, available at 20% OFF* on the day (Please present proof of purchase).

You will be participating in a group photo with the man himself, so get ready to smile for the camera! All attendees will receive the photo by email as a memento to treasure.

Please note that the event space will open only from 1.30pm on the day for registrations.

With a musical career spanning four decades, Queen founding member Brian May is a world-renowned guitarist and songwriter, with production and performance credits on recordings which have sold in excess of 100 million copies worldwide. Brian is also an astrophysicist, a photographer and author of a number of books including his latest title, Queen in 3D.

* Not in conjunction with any other offer. Discount valid in store for one day only on Thursday 22nd February 2018.