The Italian version of the 3-D Queen in 3-D book, written in first person by Brian May, including more than 300 stereo photos and a stereoscopic viewer designed by him, will be released on October 6th.

“Queen’s music has crossed every barrier of age, race, colour and religion since our first meeting in 1970, when we decided, early on, that we would change the world! I am proud of our efforts, and I hope that this book will convey part of those beautiful feelings that we ourselves have experienced while all this happened. You have all seen Queen from the outside. Now enjoy them from the inside, in 3-D “.
Brian May, from the book’s preface.

Yes, you read it well. We are talking about Queen and this is not yet another book about the world-renowned rock band that has changed the history of music. First of all, because it is written directly by Brian May, without the involvement of any ghost writer, and secondly because it features more than 300 unpublished images. And these are not just pictures of Freddie, Roger, John and Brian during their career and the many world tours: they are stereophotos mainly taken by Brian himself with his stereoscopic cameras. These 3-D illustrations printed in the book can be viewed thanks to a special device, the stereoscopic OWL viewer, designed and patented by Brian May, and which is included in the box set.

“To have a real stereoscopic vision you need two images of the same subject taken in a way that the perspective of the two points of view is as similar as possible to that of the human eyes, considering that the average distance between the two eyes is 65 mm “(Donato Consonni,”Il grande libro delle camere Ferrania” The great book of Ferrania’s photo cameras). The intuition that stereopsis, i.e. this natural human mechanism, could be artificially recreated came from Charles Wheatstone, who in the first half of the XIX century invented the stereoscope, using it with drawings made from two different viewpoints, since photography itself was about to be invented at that time.

But how was Brian May’s passion for stereo photography born? As he himself tells us in the book, he had this “brainwave” when he was 12. It all came from a Weetabix cereal box that included a picture with two almost identical photos of animals and a coupon to receive a Vistascreen viewer to enjoy them in 3-D. From that moment a great enthusiasm and interest in stereo-photography grew with him. Brian bought his first 35mm stereocamber in 1974, during the first Queen tour in the States, and since then he just couldn’t do without these devices, and he captured in a most original and suggestive way almost 50 years of the band’s history. Since 2006 he has also been running The London Stereoscopic Company, the publisher of the book. 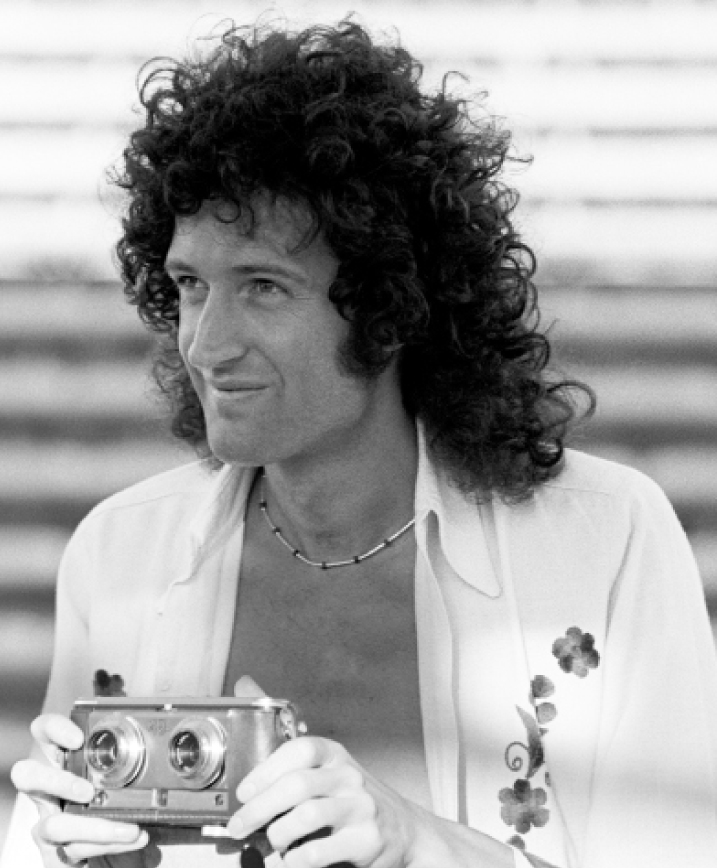 Queen in 3-D will be released for the Italian market on October 6th, published by Edel Italy and can be ordered here.

As we did for Brian May’s book on his Red Special, we’d like to talk about Queen in 3-D asking for the very precious collaboration of Raffaella Rolla, who worked on the Italian translation and who is defined by Brian in his video as “my wonderful friend Raffa”.

Hi Raffaella and thank you again for being always available for us. We already know, from the previous interview, about your connection with Queen and Brian May in particular. We know him as a musician, astrophysicist, philosopher, writer and stereo photographer…. A lover of art and science, a multi-faceted man. I have the impression we never get to know everything about him…. Queen in 3-D was defined as “the closest thing to an autobiography that May ever wrote”. Is there a “new” part of Brian and of the other band members arising from the lines of the book, which had not emerged yet?

A lot of books have been written about Queen over the years, however none of them was written by a founding member of the band. In this book there are photos taken backstage or in private moments of leisure and relax, and behind each single shot there’s an interesting story or an anecdote. And all these stories can only be told by someone who was there and experienced those moments and situations directly. Mind you, this has nothing to do with gossip or scandalistic stories, they are ordinary portraits of everyday life, of a personal experience. This is not just a 360-degree view on the Queen world, it is actually an X-ray view! 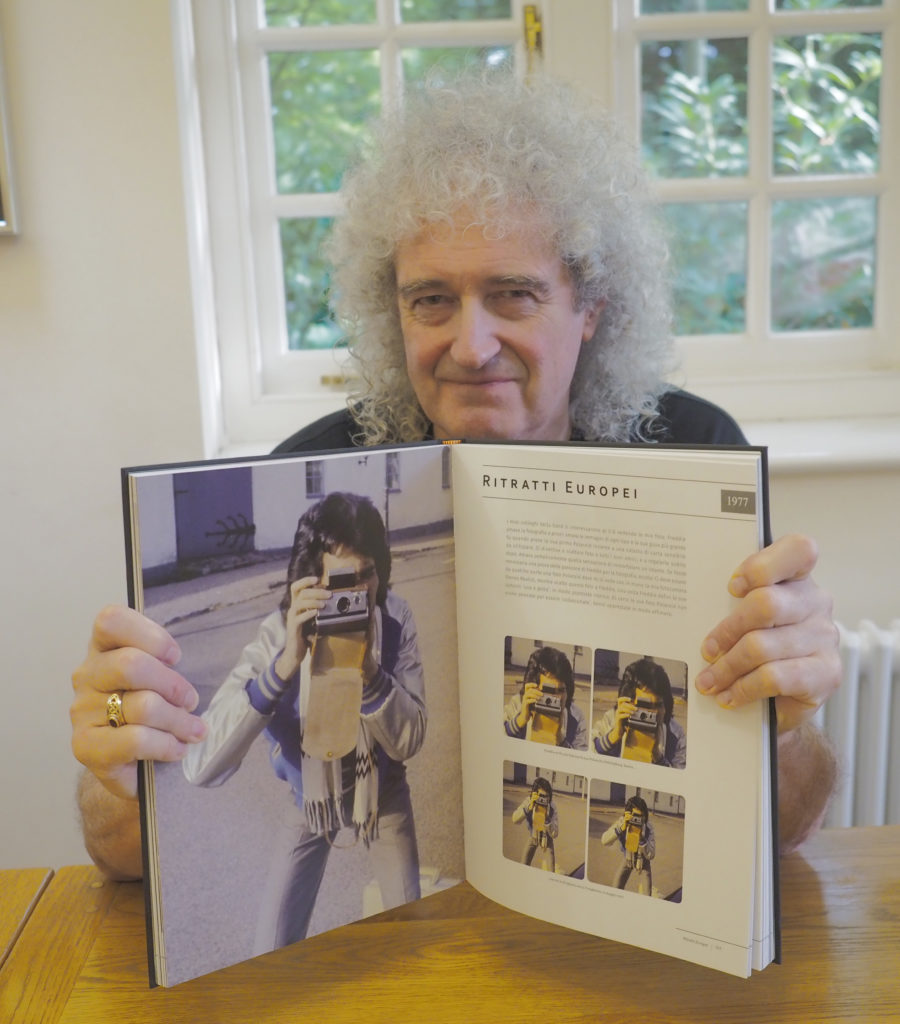 Brian May shows the Italian version of  “Queen in 3-D”

Queen in 3-D is a plunge into the past of Queen’s history and Brian’s life. As you worked on the Italian translation, is there an episode in particular that struck you most? Maybe an anecdote you didn’t know that is tied to a stereophoto, for example?

I truly loved the book as a whole, because it condenses in a most effective way the band’s history from the beginning to the present-day, but I loved it even more because it’s so exciting to see these memories that come to the surface and flow, picture after picture, like in a Joycean “stream of consciousness”. The multiple facets of Dr May are enshrined here: the man, the artist, the son, the father. The photos that struck me most are the personal ones: for instance, when he turned up at his parents’ house with his first important car to show that choosing music rather than an academic career had not been such a reckless idea after all; or for example when he tells about his cat Squeaky, how he saved her, took care of her and the promises he made to her. But there are so many to enjoy.

The project of this book took about three years. Did Brian expect to have much material?

It took three years to complete this book because Brian is always very busy and he cannot commit himself exclusively to a single project, and because it has not been easy to select the photos to be published. He has gathered so many over the years and I am sure there would be enough material at least for another volume if he felt like doing it! But I don’t think another titanic challenge like this would cross Dr May’s mind. Nevertheless, he is such an unpredictable man, always in action and “multi-tasking”, if we could define him this way. And one of his main qualities is to be able to work on multiple projects, at the same time, and accomplish them in a most excellent way. 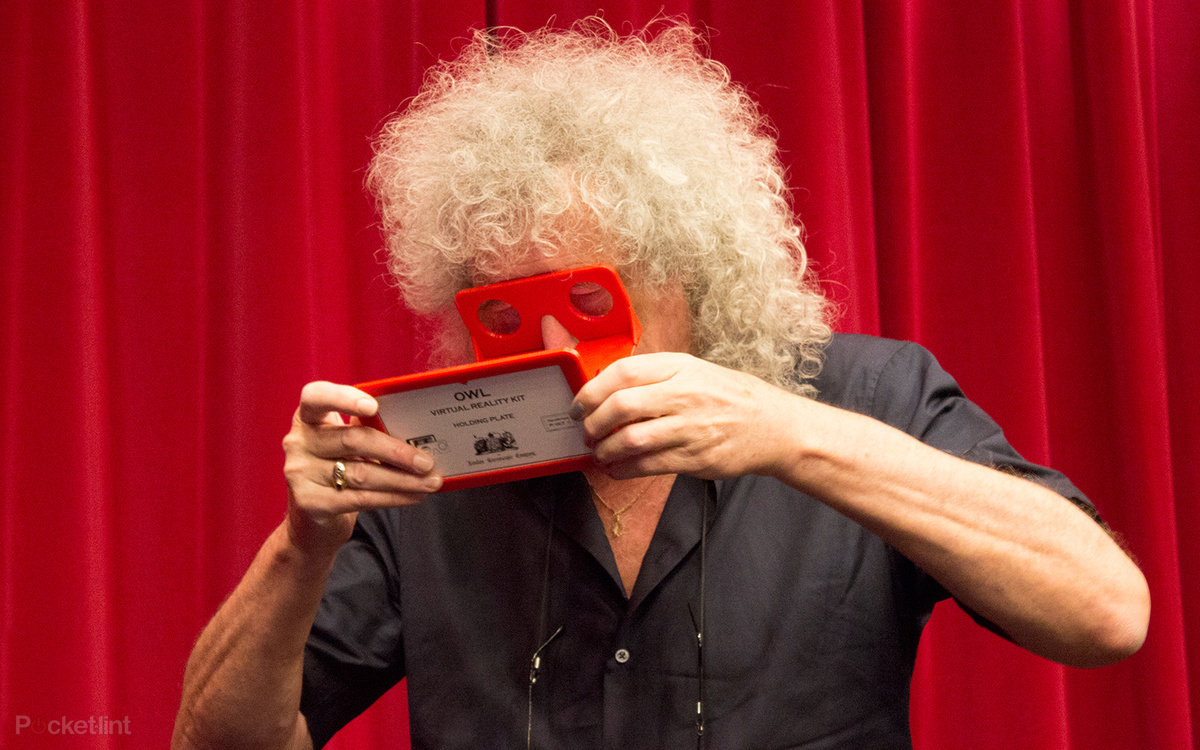 Apart from diehard fans and Queen enthusiasts, who should have this elegant Queen in 3-D box set on their bedside table?

It is an interesting book from many points of view, it is not only meant for fans or for lovers of photography, it is definitely a book for everyone. Brian introduces the readers into the magic world of stereoscopy and, by explaining in simple words, he gets them involved in his own passion. It’s not a boring book and actually, you are looking forward to moving on to the next photo and hear his story. Then again, Brian always manages to make everything he does so interesting, he puts his heart in it, and this can be perceived in his music, his photos, his words.

CURIOSITY. The Stereoscopic Photography Accessories data sheet written by Donato Consonni, whose link was provided, is about the Condor camera, produced by Ferrania with Officine Galileo, between 1947 and 1952. The Ferrania factory will be the protagonist of one of our articles in the coming months, at the opening of the Ferrania Film Museum in Cairo Montenotte (SV). We thank Alessandro Bechis, collaborator for research and advisory activities for the museum.