Brian May’s fabulous “Queen in 3-D” book is available for sale on the merchandise stand(s) at the Queen + Adam Lambert Las Vegas residency concerts at the Park Hotel, with a  bookplate, signed by Brian – see tour offer below:.

Exclusive Queen + Adam Lambert tour offer
Get your FREE copy of Dr Brian May’s book !!!
… when you buy a bookplate with Brian’s signature
from the merchandise stands tonight! 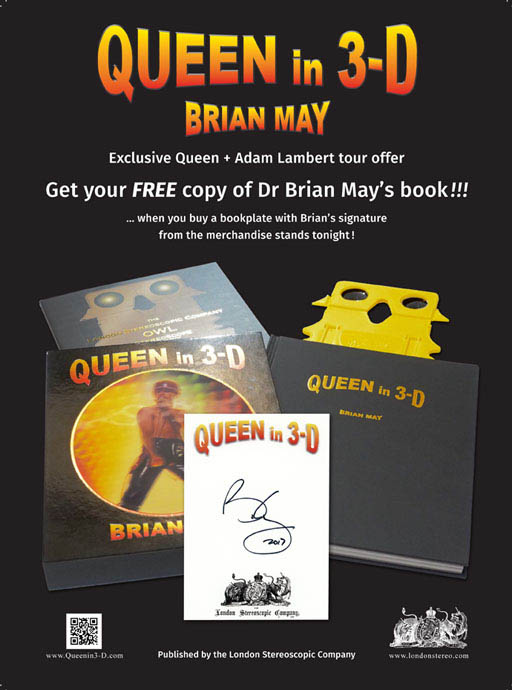 ABC.NET.AU
Brian May reflects on his career and his passion for 3D photos
24 February 2018

. This week in Sydney the 70 year old was the center of attention of adoring fans.

STUDIO: Almost 50 years ago Brian May was a young guitarist who formed a band with three mates in London. Queen then conquered the music world with their original blend of hard rock and theatre, all powered by most distinctive guitar sound.

(Lady presenter) Although he’s turned 70, May continues touring and indulging in his many passions, including photography. Candice Prosser had a rare opportunity to speak to the rock and roll legend.

BRIAN MAY: I do love what we do, yeah. It’s sometimes what goes with it is hard and all the traveling, especially when you get a little older. You’re away from your family, away from home. away from you animals. It’s tough, you know, but for that couple of hours on stage it’s worth it.

CANDICE: Queen, the chart-topping legendary rock superstars who took the world by storm with their hit songs, Though their charismatic frontman Freddie Mercury is no longer of this world, Queen’s star keeps shining guitarist. Guitarist Brian May is touring Australia with original drummer, Roger Taylor, and new recruit, Adam Lambert. This week in Sydney the 70 year old was the centre of attention of adoring fans

FANS: [Of Brian] He’s an awesome boy. He seems to be very genuine in what he does he has a passion for what he does and I think it shows in a lot of his work.

CANDICE: Although he’s used to being photographed, Brian May enjoys being on the other side of the lens. His latest book is a collection of intimate 3-D photographs he took of Queen in the band’s heyday.

BRIAN: Well this is a good one. You know, this is Freddie taking a picture of me, taking a picture of him, so I rather like this and I would love to find the picture that he took on his instant stereo camera. It is like a photo album very much so and people are shocked I find, you know, but when they actually get in there and look through the viewer they go “Oh my God. Didn’t realize that it was going to be so real and we feel like we could touch you guys – we could touch Freddie in those days.” It’s a kind of magical experience I love that. It’s magic, you know. it’s a kind of magic which I always wanted to bring to Queen… and this is where people go “Wow – I feel like I could touch him”, you know, so have a look…

BRIAN: So you see I got a “Wow” from Candice, so we’re all right.

FAN: Amazing band. Been around the world watching them. I’m actually seeing seven shows in Australia so tonight’ll be night two and then I’ve got Brisbane, Adelaide and Melbourne as well.

CANDICE: It’s been decades since Queen rose to fame, with that unmistakeable Queen sound. The music that has been loved by millions remains as iconic as ever and continues to be enjoyed by old and new generations of fans alike.

BRIAN: We’re normal people, you know. Like we’re rock stars but we’re not saying, “Hey we’re rock stars and this is what it feels like”. We’re saying we’re normal people. We have normal kind of dreams. We have normal disappointments and sadnesses and joys, love etcetera. That’s what we talk about in the songs. I think that’s what it is, and we were fiercely competitive as writers, you know. (Gestures) I’m doing this… who does this remind you. You know we live in strange times but the fact that I think we still talk about normal things, the things that everybody feels inside, that’s kind of what it’s about.

<‘We Are The Champions’ playout>

STUDIO: Doesn’t he seem remarkably normal for a rock star. (Lady Presenter): Yeah I’m gonna have that song of my mind all day now. ‘We Are the Champion’s very appropriate. (Male presenter) it is appropriate because we go to sport now…

Brian was out and about in LA last week on the “Queen in 3-D” promo trail as part of the US launch of the book, and it could be said it went rather well…

His long-awaited “Queen in 3-D” book was finally released in the USA. on Thursday 24 August, by his own publishing firm, The London Stereoscopic Company.

Brian  was on hand that day for a book signing at Book Soup’s store in West Hollywood, where he autographed 350 copies.

– The store completely sold out of copies of Queen in 3-D.
– THREE HUNDRED people lined up outside the store.
– 500 copies bought.
– Fans were turned away at the door.
– Brian signed books for almost 4 hours!

Quote – Brian May on how “Queen in 3-D” is different from previous books his company has published in 3-D:

“This is the first time I’ve published something in more recent history – this is the last 50 years, which is not so long for a person like me. But it’s also very personal, ‘cause this is my life and this is Queen. And you’ll see Queen in this book on stage in pictures that you’ve never seen before, but also offstage in all our sort of quiet moments, but also in 3-D.”

Brian  on what makes 3-D photography so powerful for him.

“Rather than just a flat picture on a page, you’re getting a window you could walk through and it’s like a time machine, you really feel like you’re there. So for me writing the book, that was my channel. I just looked at these pictures using the stereoscope, as you will do reading the book, and all these memories flooded back, because I felt like I was there again. That’s the power of 3-D.”

He was on local radio and TV before causing a booking signing mosh pit over at the Book Soup store.

Brian also headed up a  presentation at Disney Studios the following evening –  also a huge success – and saw him sign ANOTHER stack of books.

EXCLUSIVE: If you’ll be at any of the QUEEN + Adam Lambert USA shows you can pick up a flyer with a special code to order and receive a copy of Queen in 3-D ahead of the 24th August USA publication date. 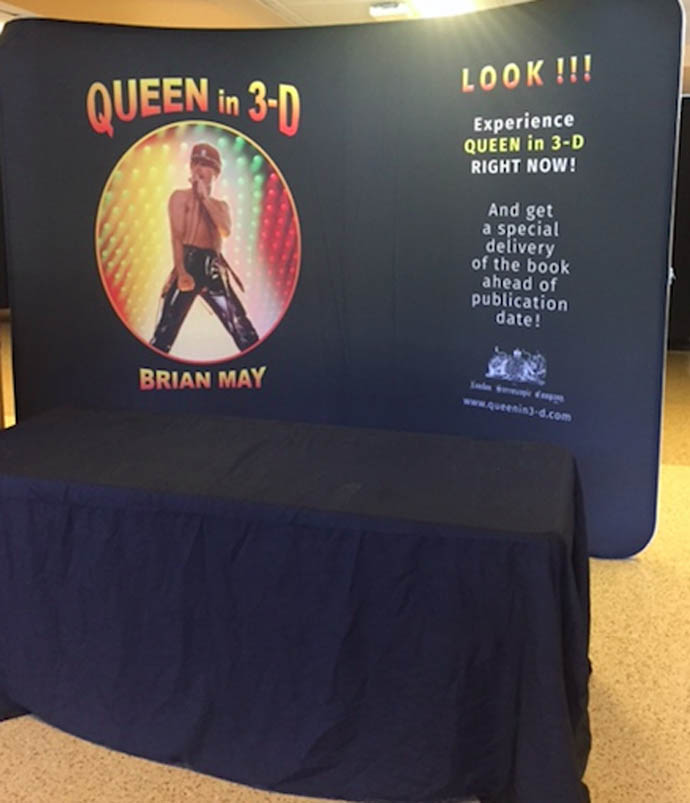 7pm Sunday 25th June – Brian May is presenting his very own one off show on Planet Rock!

He’ll be playing his favourite Queen tracks, inspired by his own photos of the band throughout the years, which are featured in his brand new stereoscopic photo book ‘Queen in 3D’.

Alongside playing classic Queen tracks, he’ll be recounting loads of great Queen memories from across the years as well. 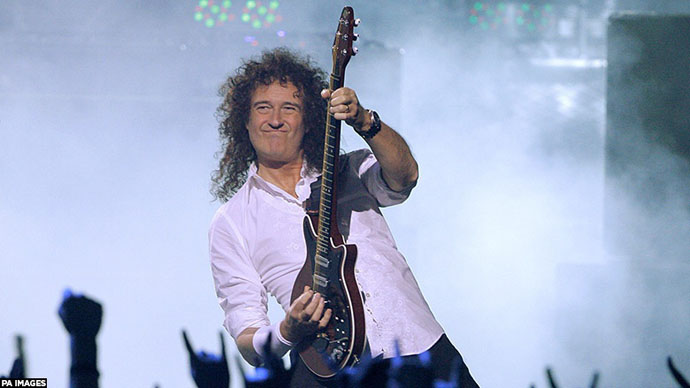 Queen in 3-D will be published in Spain – in Spanish – by Planeta probably in October 2017 – publish date TBA.

I wanted to ask if it will be possible to buy the “Queen in 3-D” book at Brian’s London Stereoscopic Company appearance on 17th May? Is Brian going to do any appearances with his book other than Hay Festival?
Thank you,
Robert

The Hay Literature Festival will be Brian’s first talk on the book in the UK,

Other events are being lined up and will be announced shortly.

A new video – Brian May unwrapping the new – forthcoming – “Queen In 3-D” book.  Starring Brian May.  Filmed by Denis Pellerin.  Part 1:  When Brian sees his stereoscopic masterpiece for the first time.  [Read on below]

[Part 2 when book is launched]

I feel like it’s Christmas because yesterday [23 April] the first copy of Golden Days came along and we were able to actually unwrap it.  The album that me and Kerry Ellis have made over the last couple of years.

Today [24 April] arrives in the post this, which is also a very long term project.  At least three years we spent on this and I must say I’m thrilled to hold this.  It’s very heavy but there’s a lot in here folks.  This is “Queen In 3-D” and really it chronicles in snapshots the whole of our history – and in fact almost the whole of my history back to being a kid when I first found the 3-D cards in Weetabix.

So it’s a story of 3-D and stereoscopy, but also of the band that we called Queen and we worked in this band for more years than I can count really.

Finally I can unwrap it, so I thought I would share the unwrapping with you and show you how it works.  Okay, no batteries needed.

So using the fingernail carefully, see if I can get into this thing.  There we are.  Amazing, amazing, amazing.  Feels good, smells good.  All shiny and new.

Front cover has a lenticular picture of Freddie on, and that’s one kind of 3-D.  Doesn’t need any batteries.  Doesn’t need any viewer and you can probably see, even in mono, the fact that it’s, well, 3-D, so should look good in the book shops and this lovely foil stuff is great.  You would swear this is embossed because it looks very 3-D in itself, but our lovely people in China have managed to do this on foil.

Welcome to WordPress. This is your first post. Edit or delete it, then start writing!