As Brian landed in Tokyo for two Queen + Adam Lambert shows at the Saitama Super Arena, his book, “Queen in 3-D” shot up Amazon Japan’s Best Seller charts to position No1 in Rock Books!

Brian then made fan dreams come true today with a surprise visit to Tower Records, where he signed books for ecstatic fans. See the photos below. 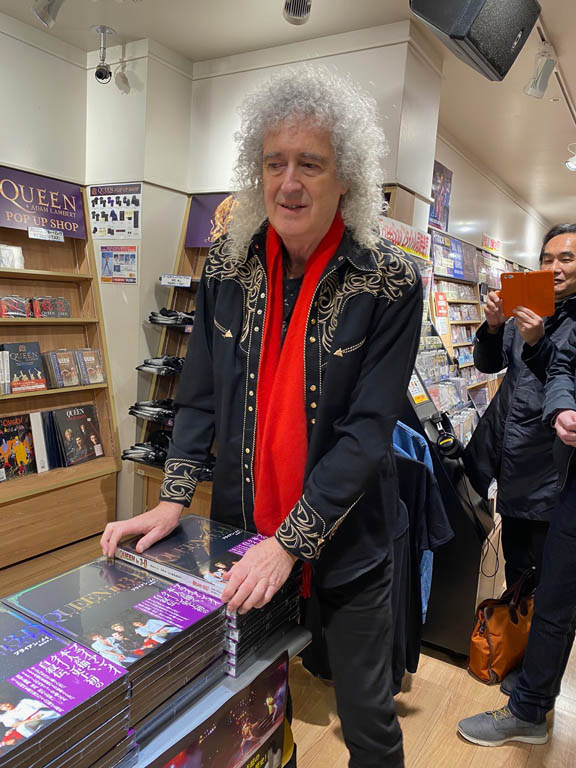 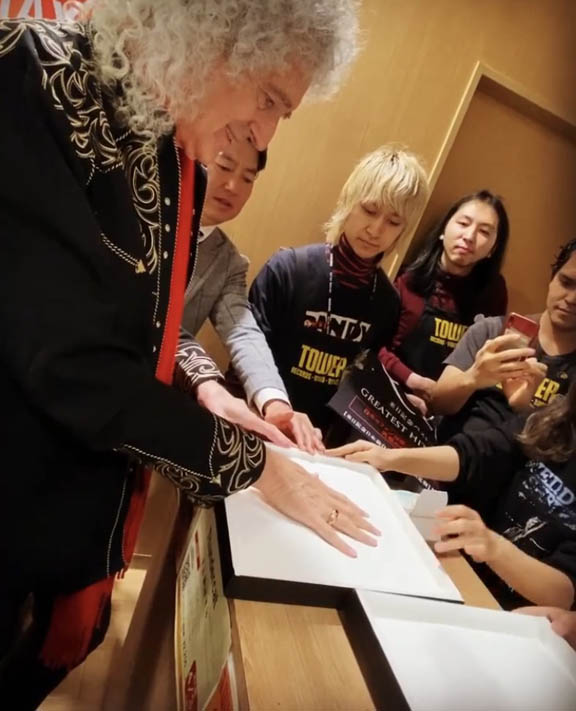 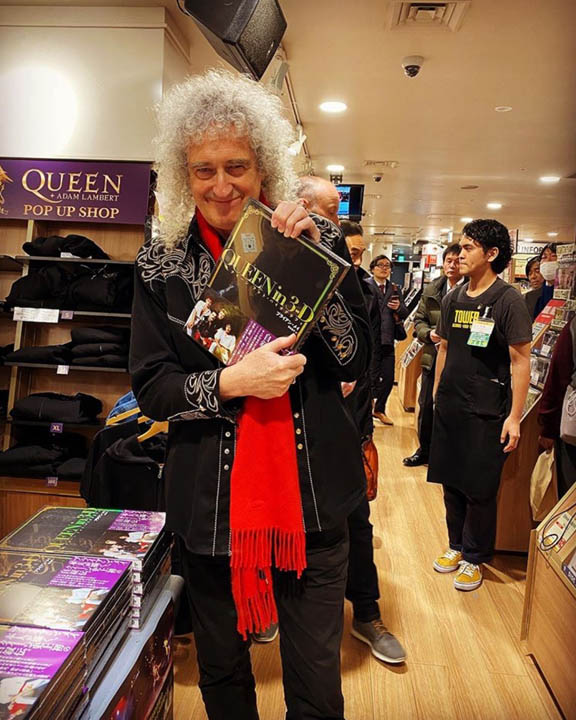 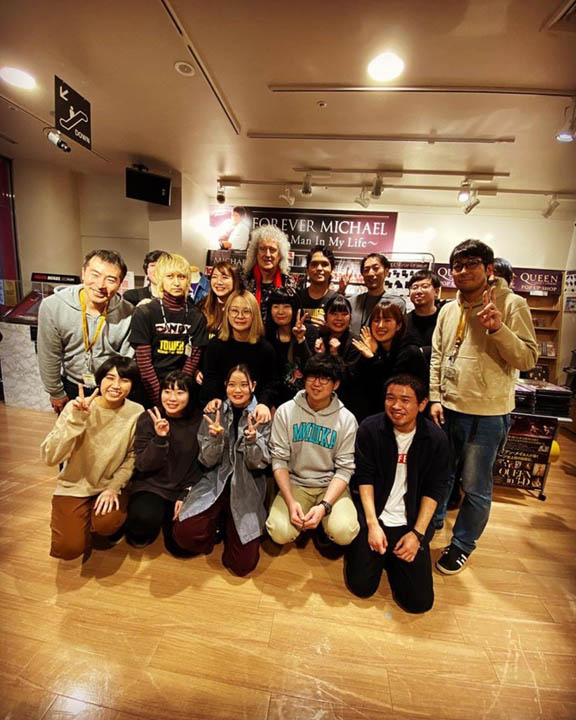 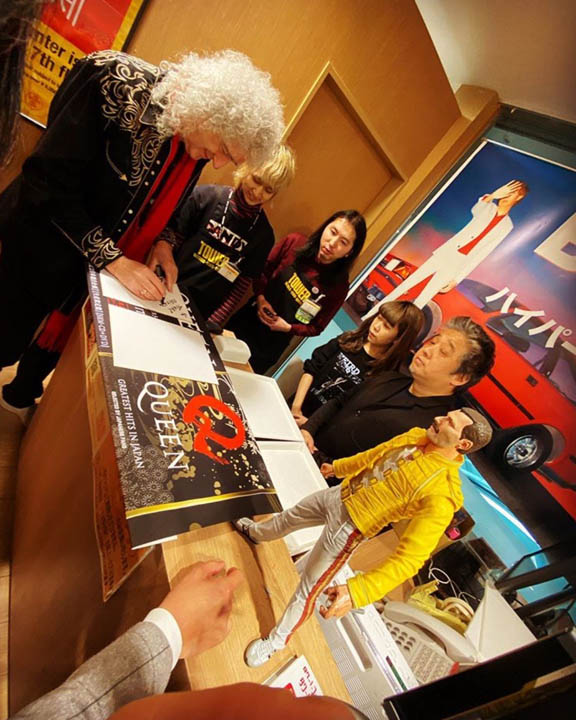 Click here for ‘Queen in 3-D’ on Amazon Japan.

Brian May’s “Queen In 3-D” will be on sale at the forthcoming Queen + Adam tour shows, with a bookplate, signed by Brian.

It should be noted that this offer is limited to the English language version of the book, which is being sold on the merchandise stalls and ‘only whilst stocks last’. There are some available at all points of this tour and will be for the European leg too.

Brian has been busily signing bookplates:

This is the advert which is in the tour programme: 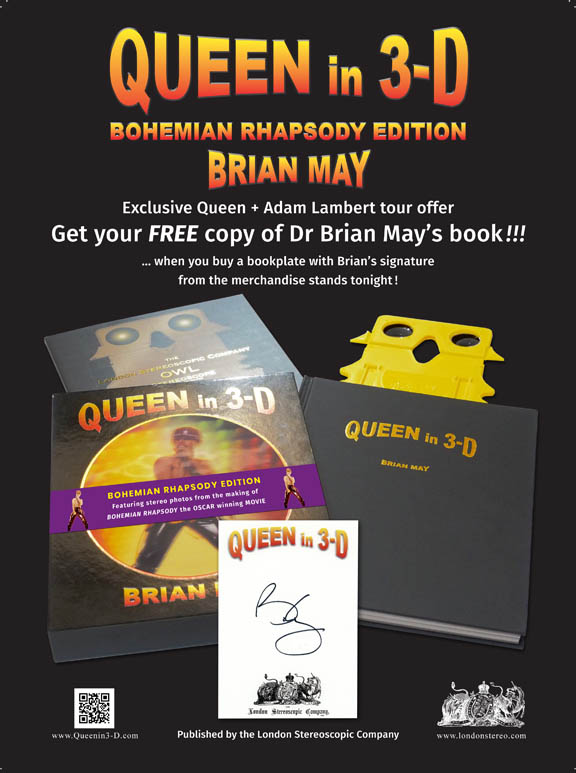 In time for Christmas, a Queen in 3-D Instagram feed has been launched…

Please visit and check out at @queenin3d 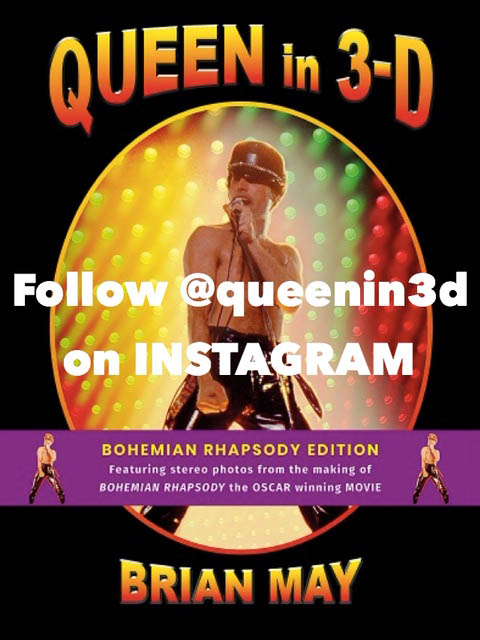 Just in time for Christmas, our NHK friends over in Japan have launched a cutting edge Queen in 3-d website for the new Japanese edition of Brian’s stereoscopic masterpiece​. 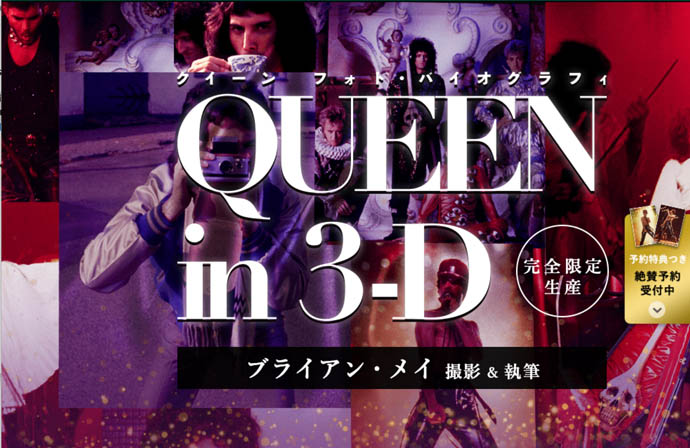 Of Brian May’s ingenious stereoscopic creations, the ultimate Christmas gift for all Queen fans around the world – Queen In 3-D, The Bohemian Rhapsody Deluxe Edition. 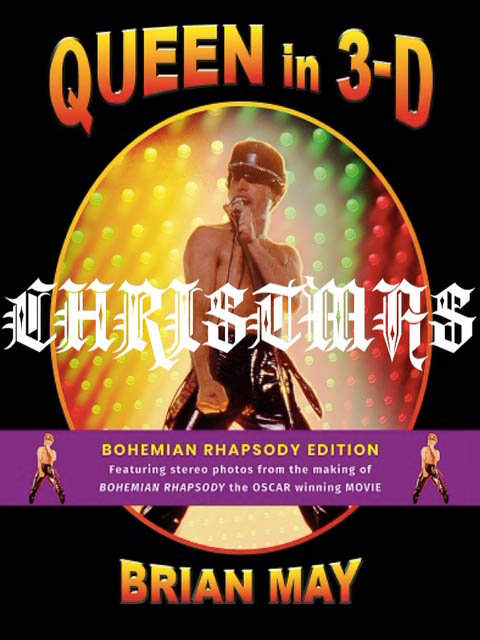 A rare treasure, capturing the story of Queen (from their rise to fame to the Bohemian Rhapsody film) through Brian May’s own camera lenses and his enchanting narrative voice.

Each book comes with the rock star’s slick OWL Stereoscopic Viewer to bring the imagery to life in mesmerising 3-D.

Order your gift fast so it makes Christmas! HERE.

See below a sneak peek of Christmas themed images snapped by Brian on the road and included in the book. 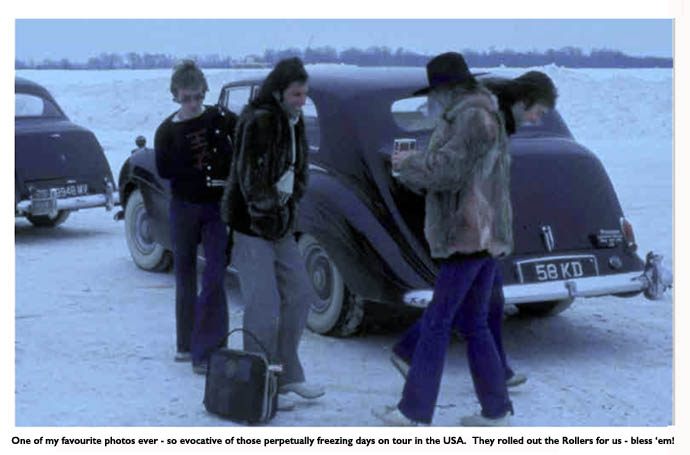 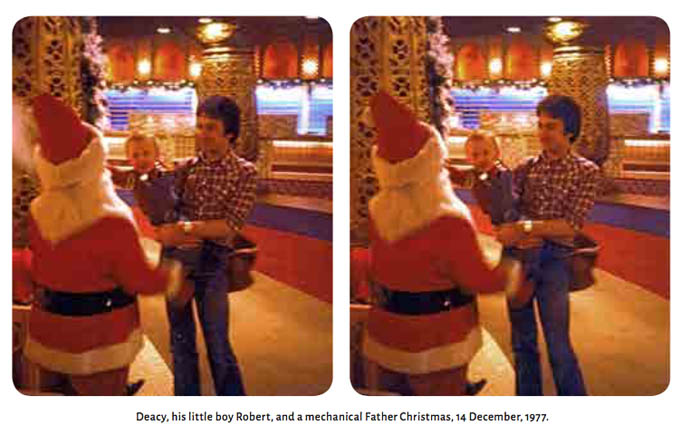 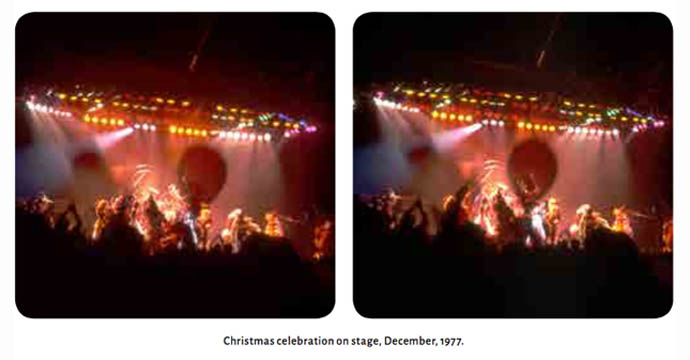 This lovely young Diva, Sarah Vautour, plays Papagena in the cast of the LA Opera production of The Magic Flute – and she loves Brian’s work! 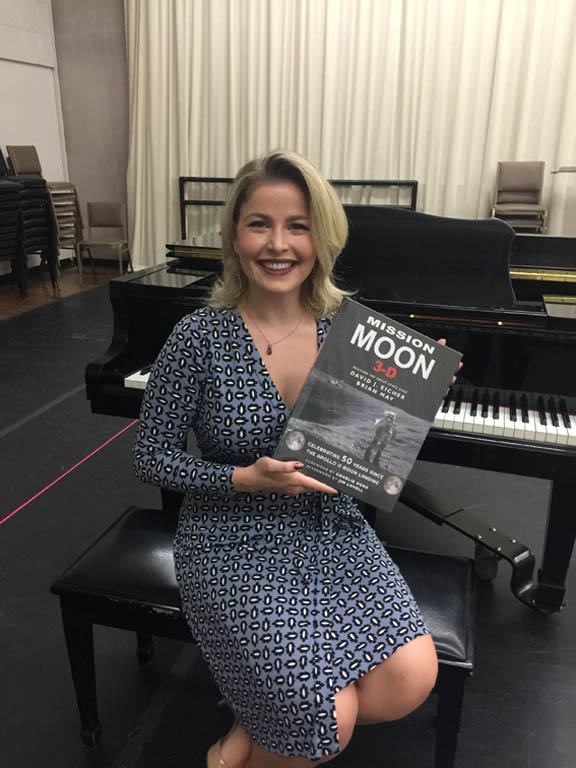 Queen Photo Biography by Brian May, translated by Akiko Tominaga, will finally be released on 24th January 2020, to coincide with the 10th Japanese tour of the band.

Band’s difficulties, moving and glorious episodes, partings and encounters are described with over 300 3-D photo images, never published before, captured and collected by Brian himself since the 1970s are presented in a big volume as 246 pages. This is the bright history of the four members, who ran through the Age of Rock gathered in one volume!

Queen’s music has crossed all barriers of age, race, colour and creed since the time we got together around 1970 and decided, precociously, that we would change the world! I feel proud of our efforts, and I hope this book will transmit some of the good feelings we felt in ourselves while it happened.
– Brian May

Publication : January 24th, 2020 / Price : 5,400JPYen (before tax) / Completely limited production
The book comes with 3-D glasses, in a special bookcase prepared only for the Japanese edition
Pre-orders can be received at https://www.nhk-books.co.jp and other online shops.
Pre-orders through Amazon, HMV, Seven Net shops are subject to some premium good offers. 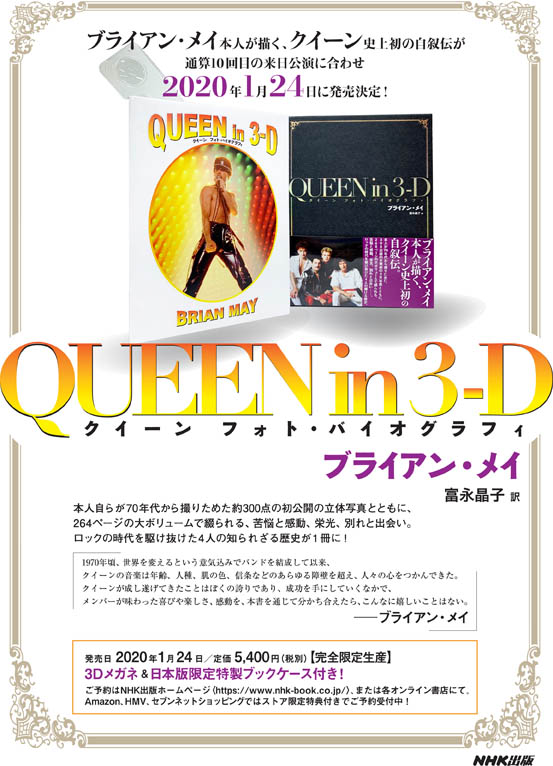 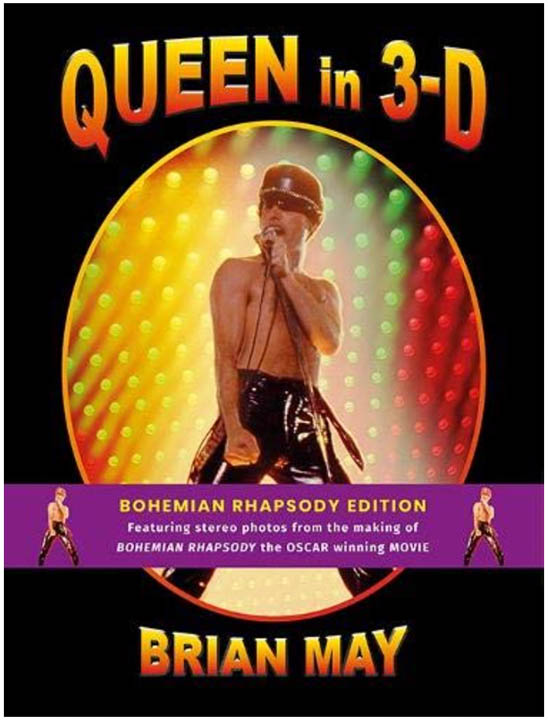 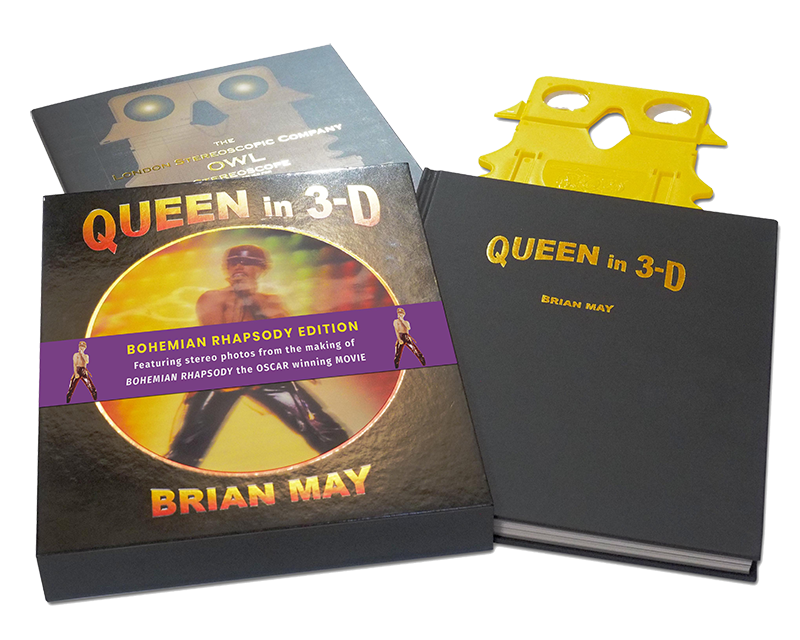 Brian May’s book “QUEEN IN 3-D” Second Edition got a welcome boost on “The One Show” last night and has jumped up Amazon’s Best Seller Lists.

Have you got your copy? 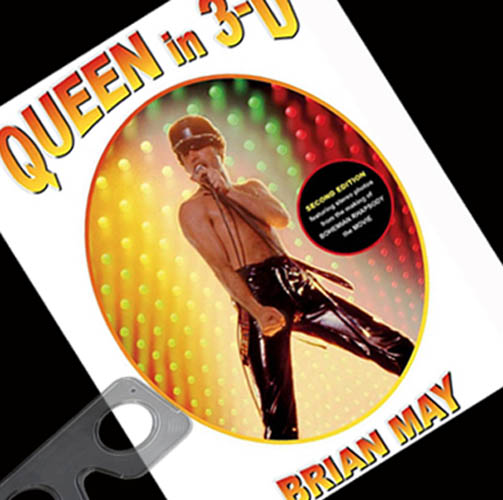 Last night Brian totally rocked The One Show talking about New Horizons and Queen in 3-D: Updated Edition and even Mission Moon 3-D didn’t miss out – as Brian had they play a clip from his New Horizons – Ultima Thule mix promo, mentioning that this is being released on vinyl for Record Store Day on 13 April.

– or an edit at https://youtu.be/gGPuNFYfTzc

Alex Jones referred to Queen in 3-D: Updated Edition as a “brilliant new book, filled with lovely intimate portraits of yourself and rest of the band” live on TV to 4.2 million viewers.

Fantastic images from the book flashed up on screen for viewers to see as they were discussed.

On Amazon, the book shot from position 5267 to No 3 in overall books and No 1 in other categories Amazon Bestsellers Rank: 3 in Books (See Top 100 in Books) #1 in Celebrity Photography #1 in Popular Music #1 in Rock & Pop Musician Biographie/ 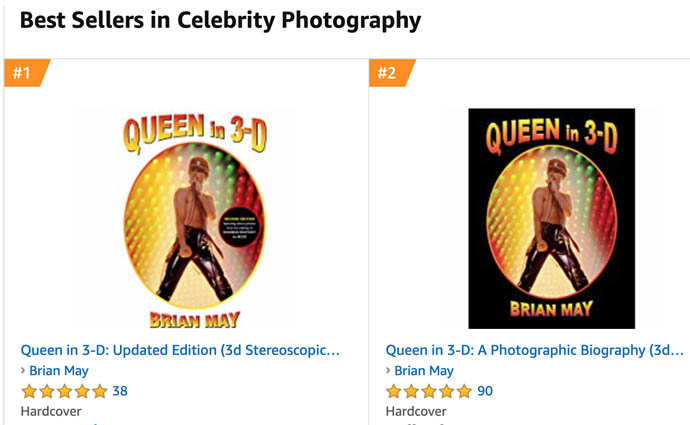 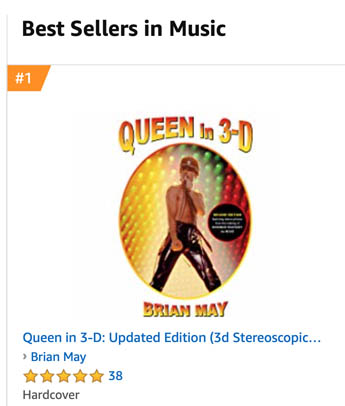 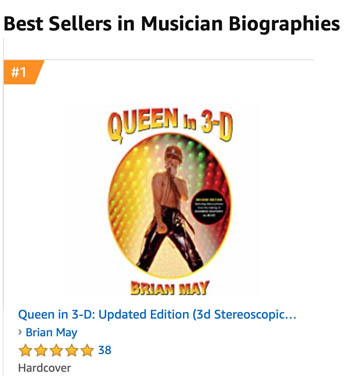 Brian May interviewed on The One Show – 3 Apr 2019 (edit)
https://youtu.be/gGPuNFYfTzc

Brian May appeared on BBC One’s The One Show tonight (7pm) and stayed on the show for 35 minutes. The atmosphere was relaxed and was an enjoyable visit. Fellow guest was comedian Joe Lycett. Brian spoke about the Oscars, New Horizons space mission and his new track “New Horizons – Ultima Thule Mix”, being released on Record Store Day in vinyl. A short clip from the promo shown. Brian also showed his “Queen In 3-D” book, which he talked about, as well as demonstrating how to use the stereo OWL viewer. 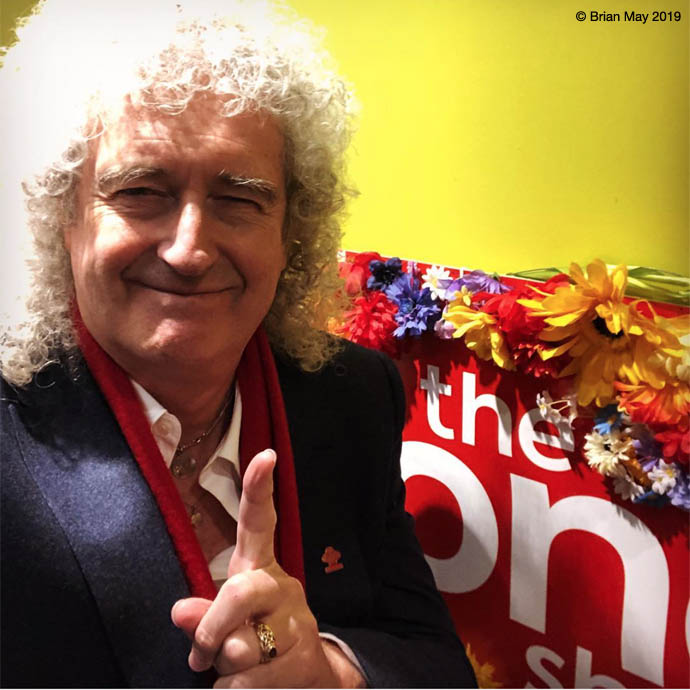 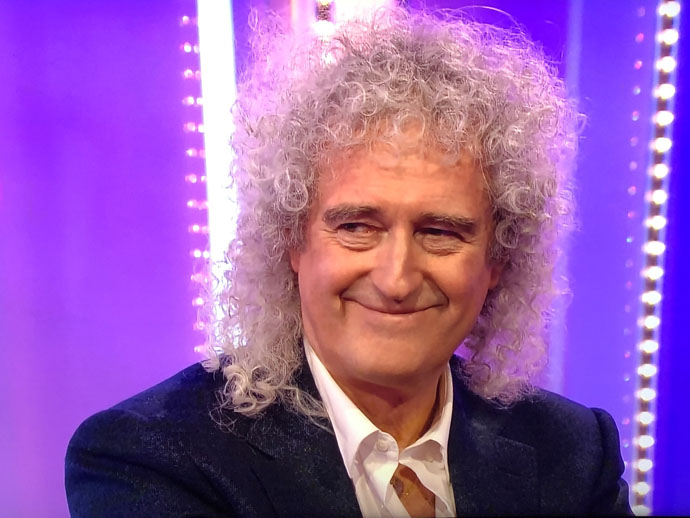 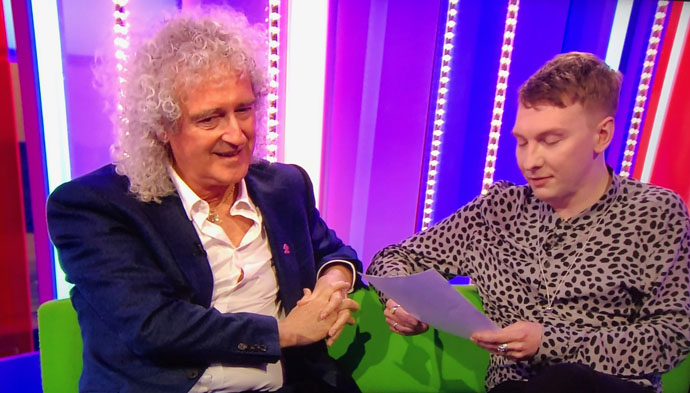 Brian May and Joe Lycett 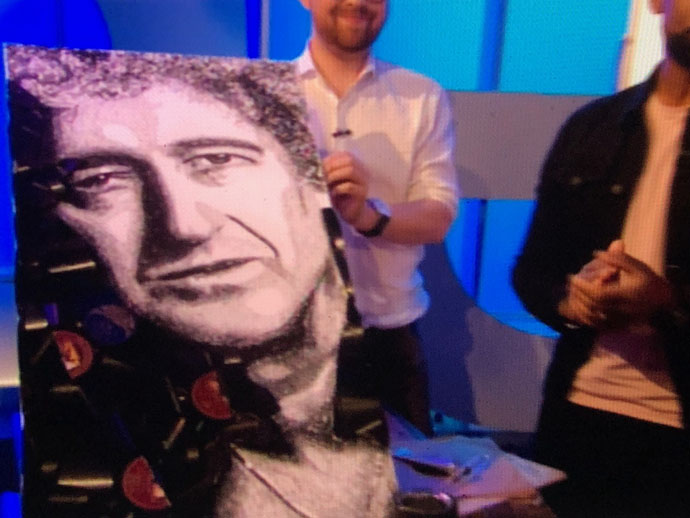 Brian May portrait made from vinyls by Ben Riley 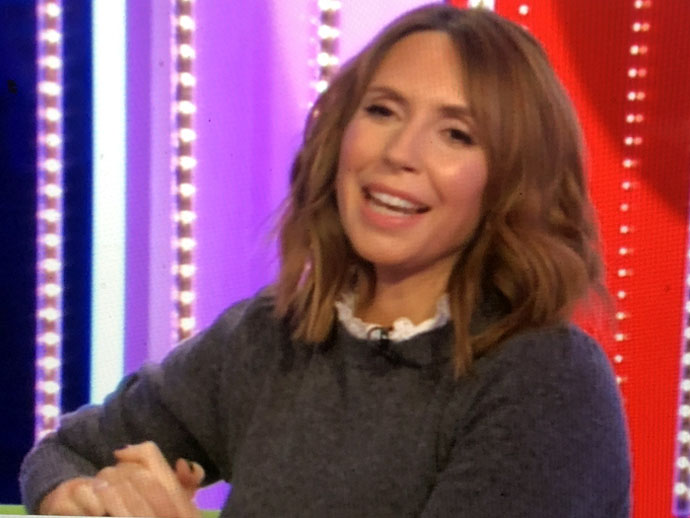 Alex Jones – We love Brian May.”